IT special forces for accelerating your project

We firmly believe that a happy client is the one who brings us another customer. Therefore, we collaborate closely with our customers and deliver the most valuable solutions. Most of us had worked in the past for the biggest companies like Tieto, Nokia, or Microsoft. The experience which we collected during our corporate professional path allows us to understand that keeping programming and managerial standards is essential for the quality and transparency of our work.

Our infrastructure solutions correspond to both large companies and small start-ups. Well-equipped office, established server solutions, and fluency in cloud-based technologies allow us to implement projects transparently and successfully. 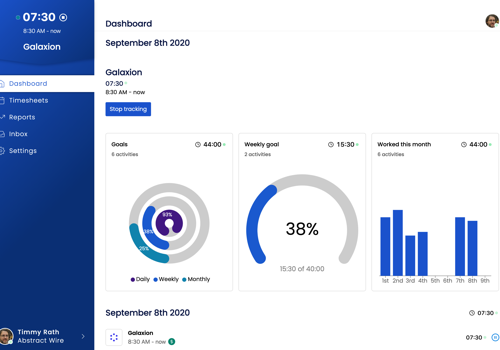 https://sandtime.io (SaaS) is a time tracker app designed by the manager for managers. It handles all the necessary things related to managing a small-medium company.

It is collecting data that allows monitoring hours spent by my Team Members on each of our projects, allow for preparing invoices based on collected data presented in the reports, optimizing the current performance and effectivity of the whole organization, different currencies for organization and projects, planning vacations, and more ...

"The hints which team share during the product development allow us to make the product even better."

"The hints which team share during the product development allow us to make the product even better."

Sandstream Development was able to finish and launch the email marketing platform successfully. The client noted their satisfaction with the project. The team provided help with organizing the internal process. They were agile throughout the engagement.

The client submitted this review online.

Please describe your company and your position there.

For what projects/services did your company hire Sandstream Development, and what were your goals?

We have hired Sandstream Development sp. z. o. o. to help us develop a mass email marketing platform. Our goal was to develop a scalable bespoken solution for sending millions of emails to our subscribed recipients. Sending dedicated email marketing campaigns is a part of our services. In the past, we were using commonly used solutions, but none of them fitted our needs.

How did you select Sandstream Development and what were the deciding factors?

We were seeking subcontractors who will help us to speed up our software development process. In the past, we checked a couple of outsourcing companies, and this one was the best.

Describe the scope of work in detail, including the project steps, key deliverables, and technologies used.

Outsourced programming services provided by Sandstream Development sp. z. o. o. supports us in the development of our solution. At the very beginning, the team prepared to be a part of our product development team. They organized the whole development process in a very flexible way.

When they joined us, we were after the MVP development phase. The entire process was fully automated. The project took around twelve months to complete.

How many people from the vendor's team worked with you, and what were their positions?

The team size was changing during the projects. We started with three programmers and a dedicated project manager acting also as a Scrum Master. Then we decided to speed up the project, so additional two programmers and QA joined.

Can you share any measurable outcomes of the project or general feedback about the deliverables?

Before we started our cooperation, we had strived for several inconveniences related to the limited functionalities of well-known and used spready solutions for email marketing. It is a very fragile part of the market, so if something is not working due to some bugs or lack of support, the whole business is affected.

The system developed by the team allows us to avoid such incidents. Since we launched the system, we have full control of the whole environment, making us happy because we can work without any delays.

Describe their project management style, including communication tools and timelines.

Each month they were sending us an invoice with really burned hours. Sandstream development sp. z o. o the manager helps us organize the process in a way that suits our internal processes like CI, CD, or DoD. Our communication was via TeamSpeak, Google Meets, and join.me.

What did you find most impressive or unique about this company?

The hints which team share during the product development allow us to make the product even better than we plan initially. Seeing results from the very beginning was something that makes me feel comfortable, and now I understand why people love the agile way of working.

Are there any areas for improvement or something they could have done differently?

Nothing to improve. They are doing an excellent job.

"They were always ready to give their best and offer a great solution. "

"They were always ready to give their best and offer a great solution. "

Sandstream Development successfully delivered the game. They were able to finish it in a timely manner and is now fully utilized by the client for their training. The team was supportive throughout the project. They were open and proactive when it comes to approaching problems.

The client submitted this review online.

Please describe your company and your position there.

I am the CEO at pm2pm sp. z. o. o. We provide comprehensive training and consulting services in project management.

For what projects/services did your company hire Sandstream Development, and what were your goals?

How did you select Sandstream Development and what were the deciding factors?

It was an active search during which I reviewed different software companies. We spoke with several vendors and Sandstream Development sp. z. o. o. seemed to be right for the role. A key thing which I realized was that many of these companies want to look at the cost first and the product second.

I liked their approach to the client, and thanks to that, they quickly gained my trust. Sandstream Development sp. z. o. o. was a natural pick, rather than other vendors.

Describe the scope of work in detail, including the project steps, key deliverables, and technologies used.

The application provided by Sandstream Development sp. z. o. o. consists of two parts: intended for training participants (simulation environment) and the trainer (trainer panel). The scope of work included many expert DevOps services. Sandstream prepared everything in such a way that the entire development process was fully automated.

First, the team built and provided us with the product in the MVP version. Then they continued working on other functionalities of our application. During development, we have followed the agile principles. The app uses technologies such as TypeScript, Node.js, MongoDB, ReactJS, Redux.

The team has provided development work on both the back and front-end side with quality assurance tests and project management service. The project took five months. They have delivered the solution in the given deadline.

How many people from the vendor's team worked with you, and what were their positions?

The software development team consisted of two programmers, a QA tester and a Scrum Master, our first contact point. During the whole development process dedicated Project Manager was supporting us.

Can you share any measurable outcomes of the project or general feedback about the deliverables?

I can say that everything they have done works well. We use the finished product during our training. Through the practice in a simulated environment provided by the application, we can help our participants gain practical experience that shows project management’s realities and consequences.

Describe their project management style, including communication tools and timelines.

Almost no bureaucracy. They were very supportive. From the very beginning, we were aware of how much it could cost and how long will it take. We signed the General Agreement and Non-Disclosure Agreement very quickly. Sandstream Development sp. z. o. o. operates based on various project management methods and methodology (IPMA standard, Agile, Lean).

We agreed that Agile suits the best for this project. Every week we organized sprints to discuss what was already done, see the latest demo, and decide what to prepare before the next sprint. We used JIRA as a software development process tool. We were communicating mostly via Google Meet/Hangout.

Their approach to solving any problems was very open and proactive. They were very encouraged to present their visions of addressing our needs and how to do it.

What did you find most impressive or unique about this company?

From the very beginning, the team seemed fascinated by the product. I was impressed with their transparency, the quality of work, and the overall process. The team kept deadlines all the time. They were always ready to give their best and offer a great solution. I am happy with their professionalism. I have collected many suggestions for improving the application.

Are there any areas for improvement or something they could have done differently?

I don’t think there are any areas for them to improve. They are doing a great job.